The world's ten most important diagrams

It is difficult to find good data about the state of humanity. For this reason, this blog post contains the latest figures – and prognoses in some cases – for the ten most important indicators of the state of the world: economic freedom, income, poverty, hunger, water, electricity, literacy, life expectancy, democracy and war. Those who want to know more are recommended to read In Defence of Global Capitalism by Johan Norberg, even if some of the statistics are a bit outdated.

Economic freedom is the freedom to own things, not pay high taxes, trade with other people and countries and run businesses without government restrictions. Economic freedom has increased substantially over the last few decades: 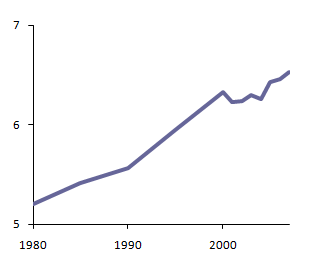 Economic freedom. Weighted average for countries with 86 percent of world population on a scale 1–10.
Source: Own calculations based on Economic Freedom of the World (Swedish)

And since more economic freedom causes higher growth, it is not surprising that world income (GDP) per person has increased. Can you spot the financial crisis in the diagram below? You may need a magnifying glass. 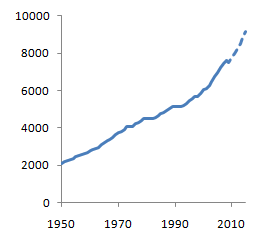 The world has become more equal over the last few decades. This has made the effect of increased prosperity on poverty even more profound:

Hunger and poverty are likely to be closely associated. Therefore it is surprising that hunger is exhibiting a much slower rate of decrease since the mid-1990s. It is also believed that hunger increased temporarily during the 2009 financial crisis. 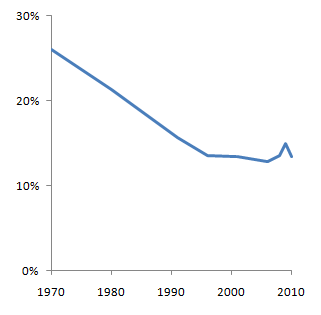 Hunger. Share of people who are undernourished.
Source: FAO

Access to water and electricity has improved dramatically, though, thanks to investment over a long period of time. 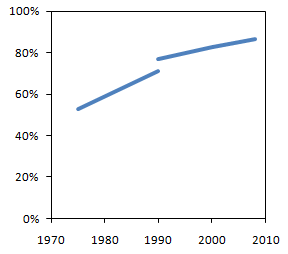 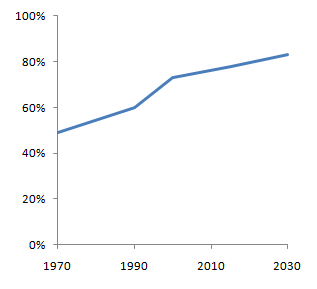 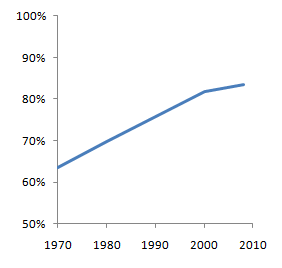 Health is improving in pace with economic and technological progress: 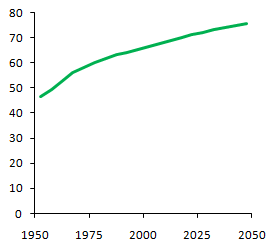 The correlation between economy and democracy is strong. Hence it is not surprising that we see a long-run positive trend for the share of people who live in democracies (green): 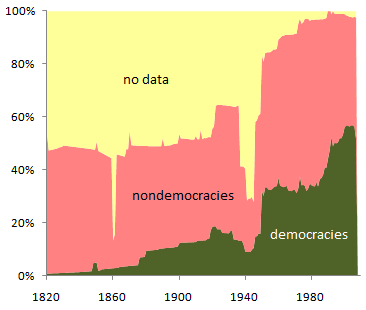 Democracy. Proportion of people who live in democracies.
Source: Own calculations based on Polity IV (Swedish)

Two democracies have never made war against one another. That is in all likelyhood a partial explanation of the fact that the war death rate decreased by 95 percent between the Cold War and today: 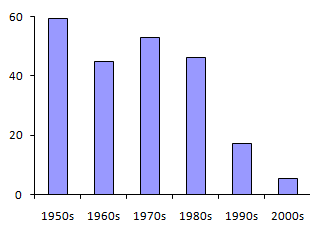